Goodbye, cardboard ticket! What Metro users in Paris should know

Goodbye, paper tickets! First to disappear are the ten-packs

Everybody knows that: The RATP ("Régie autonome des transports Parisiens"), responsible for Parisian public transport, will gradually abolish the familiar paper ticket. In the short term, the ten-tickets, the so-called "carnets", are affected.

What this means for you and how you can continue to spontaneously use the Paris public transport, is summarized in this article.

From October 2021, the familiar cardboard tickets are to disappear, or more precisely the ten-packs, which were always a bit cheaper than buying them individually from a vending machine or bus driver. Of course, the tickets will not simply be taken out of circulation from one day to the next, but gradually.

The transition will take place in three phases:

1) From October 14: end of the sale of ten-packs for t+ tickets at the ticket machines at around 100 stations.

3) March 2022: abolition at all vending machines and ticket offices in the RATP network.

Clicking on the map visualizes the gradual adaptation in Paris and its suburbs: 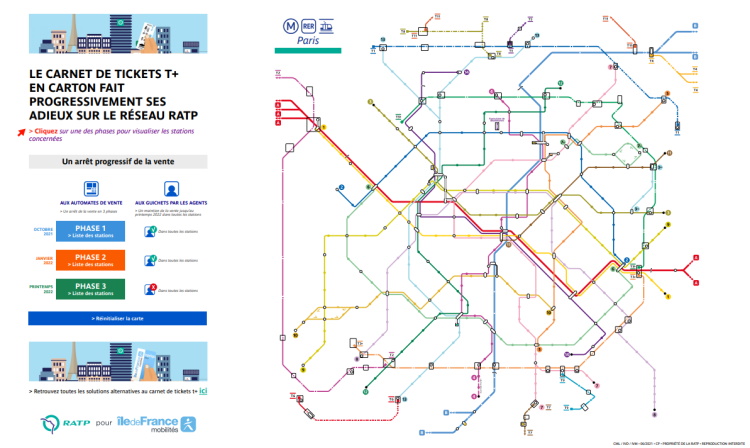 Overview of the gradual adaptation in public transport (Copyright RATP)

What does this mean for you?

The cardboard ticket does not disappear completely right away, only the ten-tickets. But that you should look for alternatives should be clear. And there are a few of them.

As an occasional driver or tourist, you can rely on the Pass Navigo Easy, which is also sold at major train stations and airports for €2. This can then be charged at vending machines in all stations and at ticket offices, in RATP boutiques and via the "Île-de-France Mobilités" and "Bonjour RATP" apps.

If you travel a bit more frequently, but are banking on a bit more freedom than monthly subscriptions and have a local residence, Navigo Liberté + is a good choice. As soon as you travel by metro, bus, streetcar or within (!) Paris by RER, each trip is counted and billed in the coming month. The advantage: if you don't travel, you pay nothing. You only pay for your actual journeys and do not pay in advance. In addition, connecting journeys within a certain period of time are counted as one total journey, e.g. if you take the bus to a metro station and then change.

Why is the cardboard ticket being abolished?

It's true that the cardboard t+ ticket has a long history in public transport in the Île-de-France region, but there are good reasons for phasing out the ten-pack and later the one-way ticket. The global trend has been going this way for some time, for example in London, where you can scurry through the Tube entrances with your Oyster Card or a contactless credit card.

One major benefit is undeniably waste reduction. In 2019 alone, 28 million tickets were sold in packs of ten, according to RATP - thrown on the street, a ticket takes a year to decompose, the same amount of time as a cigarette butt.

Simply thrown away: Waste avoidance is a key goal of RATP

The switch also makes sense for practical reasons, as the modern options are contactless, easier to validate and no longer demagnetize just because they are near keys, coins or credit cards. If you also use an app to charge, you also eliminate the hassle of waiting at ticket machines.

As indicated at the outset, the complete abolition of the cardboard ticket is not yet close.

I find RATP's decision logical and forward-looking. Personally, I am a user of the Navigo Liberté + since 2019 and very satisfied. Provided that one can show a French residence along with account details - from there this pass is less suitable for tourists.

If I travel with it within Paris and can estimate that I will stay under the price of a weekly or monthly ticket, I pay per trip as described above. Otherwise, I load up a season ticket and in that case I can then also travel freely by RER to the suburbs. By the way, these are also accessible by bus or streetcar and can be used in that case without recharging. Just takes longer...

Somewhat unfortunate I find thereby that default that RERs can be used only within Paris, but there are for frequent travelers options. I also get along with it in everyday life, because with the booking of a week ticket, for example, one can really speak of liberté.

Feel free to contact me with any questions about public transport in Paris and the île-de-France to experience the region faster!