Report: That´s how I helped Sandra find an apartment in Paris!

Last year I worked with Sandra who asked me to find an apartment in Paris. As we are still in contact, I suggested an interview to her. I was interested to hear how she feels now, a few months later, about her decision to have hired someone to find an apartment and how she is doing today.

Sandra lives in a studio in the north-west of Paris: ground floor with 35 square metres, spacious kitchen and bathroom with window and bathtub. It is an old building, not Haussmann-style, but with a high ceiling so typical here.

Sandra, we met in January 2020. You had contacted me through my website and asked me to find you an apartment in Paris. Please introduce yourself!

I'm originally from Austria and was 32 years old when we met. I came to Paris because of love and I lived in a not so good area. That's why it was very important to me to get away and find a great apartment in Paris.

Where exactly did you live and what was less appreciated?

I lived in Aulnay-sous-Bois. In my corner, unfortunately, it was very filthy, not very pleasant to live.

Before you approached me, I'm sure you had been looking for a while yourself.

A bit, but I was actually looking for a German-speaking estate agent in Paris from the beginning. I did find a few contacts to real estate agents via Facebook, but nothing ever came of it. De facto, I simply didn't find one. And of course I used the well-known apps like Seloger etc., but since my French skills weren't good, I couldn't actively search myself like I wanted to. 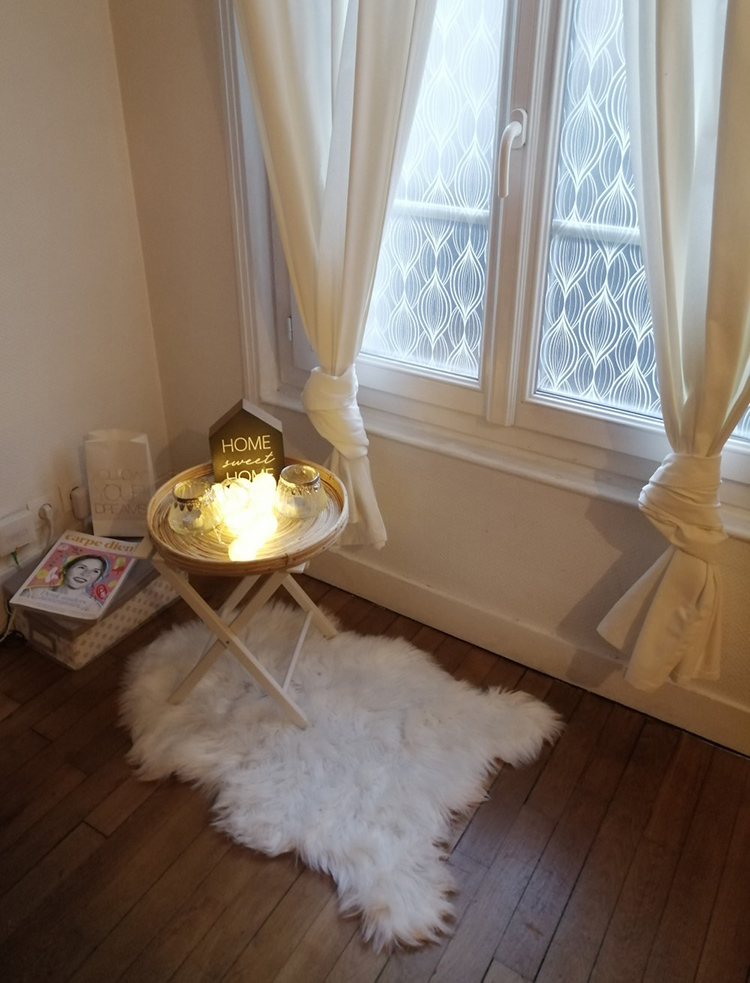 It's true that house hunting in France doesn't work with estate agents like we know it from Austria or Germany. That's why I told you straight away that I don't work as an estate agent, but that I could do the apartment search for you.

The service provided by you and "Gate to Paris" appealed to me very much because the German language was a very important point for me. And also because you were able to help me with the application folder, because I noticed that things work very differently in Austria than in France.

What was the big difference?

For example, having a guarantor or the rule with the three months' rent. It's not so strict in Austria and it's different, easier.

Did you compare offers before choosing me?

For me, the German advice was actually important. And I wouldn't have found a second person easily, so I didn't have a comparison.

Were there any concerns before we started working together about finding you an apartment in Paris?

Personally, I didn't have so many concerns, but of course I talked about it with friends and my family, and they were all "shocked" about my plan. I don't think this service is well-known in Austria either. But my feeling was always very positive, even if the amount is high at first sight.

Note: I can understand these thoughts. Looking for an apartment in Paris is a very time-consuming affair, especially if the personal situation and application documents cause problems. These are factors that play a role in terms of price, and I offer different packages because there are also different wishes for the  apartment search. Some clients ask that I only check their dossier, others ask for pure research and would like to do the viewings themselves, still others want support all the way to the handover of the apartment and with contracts relevant to the tenancy. 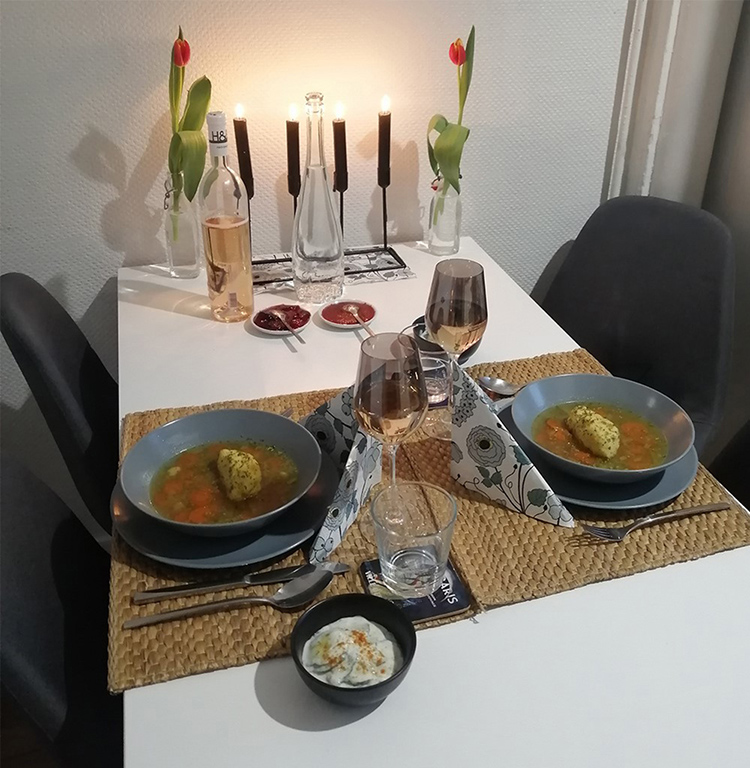 Austrian hospitality in Paris with a delicious "Grießnockerl soup" and more

We then met for an initial conversation in a café near Châtelet, where we got to know each other, discussed important points and concluded the contract. Then there was a hard lockdown in Paris from mid-March 2020 and we couldn't start looking. How did you feel at that time in your apartment, which you really wanted to leave?

Yes...it was difficult. It was absolutely impossible to plan when the move could happen. But the fact appealed to me that we were always in contact with each other. That's why I always had the feeling that something would come. And that's exactly what happened.

Note: I was also happy to be able to keep Sandra as a customer at that moment, because of course I would have been accommodating due to the extreme situation and would have cancelled the contract. Covid-19 is a problem for a lot of people.

After many weeks, we were finally able to start looking for an apartment. To put it briefly: I did the research and the viewings because you couldn't be there for professional reasons. You always received pictures and video footage of the viewings, once you were able to join in via video, and afterwards I always addressed the conspicuous features as well as the advantages and disadvantages of the respective apartments.

I felt in good hands during this whole time. I also received very good advice, because your approach was really structured. I had to fill out the questionnaire with my wishes for the rental apartment. So it was easy and very clear for both of us what I wanted and what you could do for me.

Only from the outside I heard a lot of negative things. "You can't let a stranger look for an apartment!". But I always had a good feeling, I trusted in you. 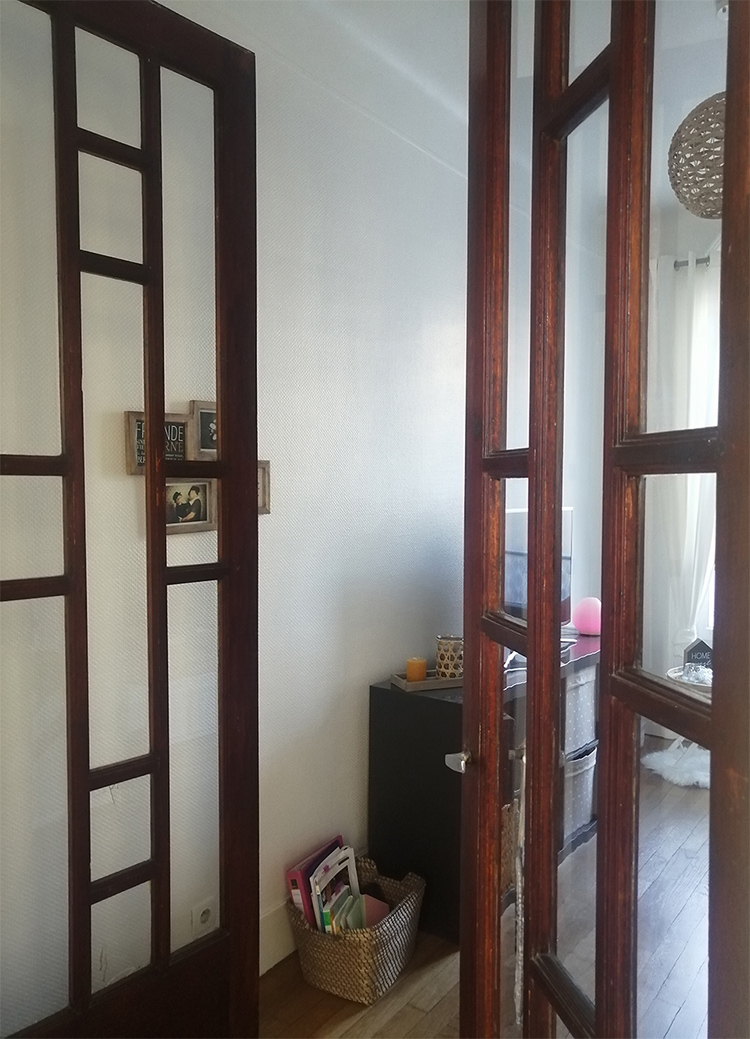 We both liked the swinging door directly

Were those close friends who told you that?

Several people, friends, family, work. But what really appealed to me personally were the videos you made for me during the apartment inspections, and of the surroundings, so I could get an impression. It was all very well thought out. I liked what you offered and that also helped me.

Note: I am happy about her compliment. It should be mentioned that Sandra's application really was very poor for French requirements. Many documents were missing, there were hardly any French documents. Some of them were incomplete and the rent/income ratio was poor at the time.

I think Sandra made the right decision - not because I was the only one who could have helped her - but because together we were able to optimise her dossier so that it looked convincing and I was then able to react much better to the landlords' questions. And that was the deciding factor.

After eight days, we found an apartment for you. You had to make compromises, because you wanted a balcony, for example, and wanted to exclude the ground floor. Now you are on the ground floor without a balcony, but with a garden and a large kitchen instead of a kitchenette, which is usually typical in one-bedroom apartments.

Exactly, balcony and ground floor.... And also old building, which I didn't want (laughs). But I remember well that we extended the search after a few days, and a crucial video describing the apartment to me convinced me. At that moment I suddenly saw myself in the apartment and that was a "oui" for me. 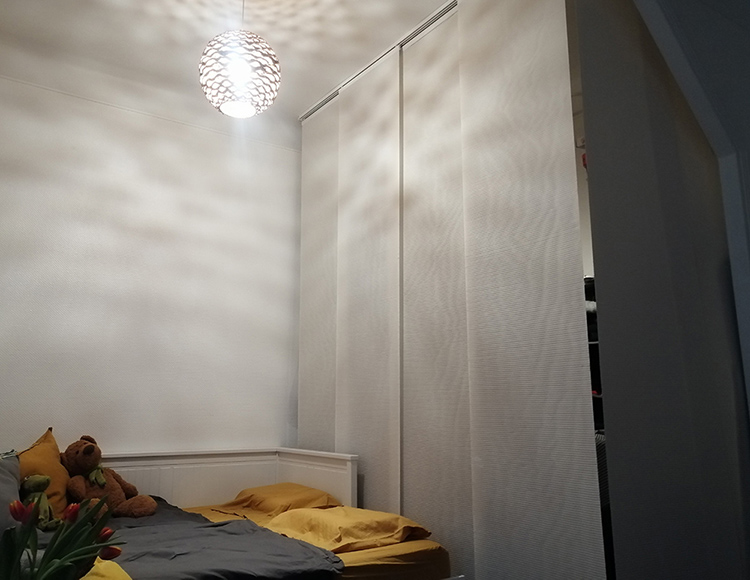 How do you feel now, after many months in your Paris apartment?

I still feel totally fine and really like living here. I don't have a balcony, but I have a garden out there. A big kitchen, and the ground floor doesn't bother me at all anymore because the area is just very quiet and pleasant.

So, I have definitely fallen in love with my apartment. It has something, a special flair. I also enjoy the direct, short bus connection to work, that was one of the reasons, the distance to my work. That point was very important to me and it was absolutely fulfilled.

I think you can definitely try to look for an apartment yourself. That's what I did at the beginning, I set up some filters on websites. But I think there are advantages to handing over the search to a professional who knows all the background information, also with regard to the dossier, etc. I had also entered some information myself. I had also asked for some information myself, but still not as much as I got from you. And that's why it's certainly better and quicker to book a relocation service in Paris.

Sandra, thank you very much for your time and the nice conversation! 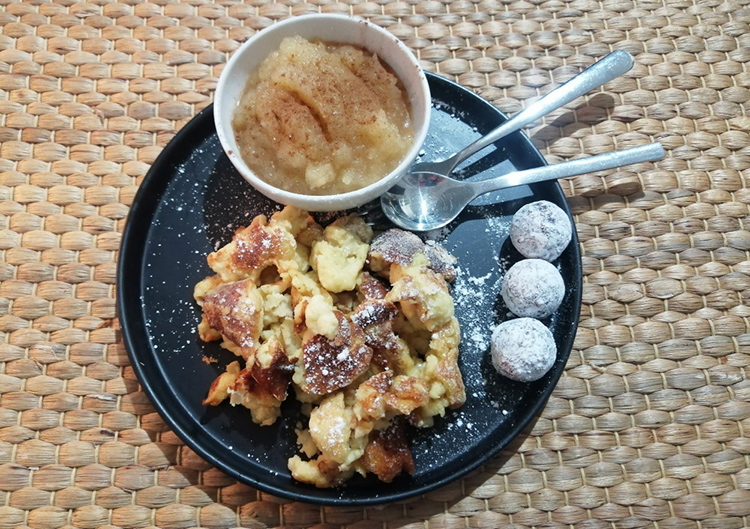 Freshly made Austrian "Kaiserschmarrn" for the finale

There are different situations we can encounter when looking for an apartment in Paris. Three phone calls, an impromptu viewing - and you can move. I also know the situation where a prospective client made a commitment but cancelled shortly afterwards because she found an apartment.

Of course, I'm very happy when things work out. You can always try to find an apartment yourself, for example in groups on the internet where you can ask, and also through private contacts in Paris. But there is a bit of a gamble in the air, especially if you do not have much time.

If questions occur and for much more support just contact me and get to know all the possibilities  in an initial conversation! Leaning back is more fun than having to make an effort yourself