Interview with gendarme Laurent Hennequin: Paris, safe or not?

Every now and then, customers ask me how life in Paris feels. And that doesn't mean the feeling after taking a bite of croissant in the morning. Sometimes it's about the threat situation in Paris, especially after the terrorist attacks in 2015, but also about which arrondissements are best to avoid and what to look out for.

Basically, Paris is a big city like many others, where common sense is advisable. But also no paranoia is necessary. With this in mind, I talked to Laurent Hennequin, gendarme and for several years my trainer at  Ladies System Defense, an association that offers self-defense for women in the Paris area.

Hi Laurent, first of all, thank you for answering my questions today! Please introduce yourself briefly.

Salut Claudia, with pleasure! Well, my name is Laurent, I'm 48 years old and I've been a gendarme for 26 years. I am also a safety officer and situation prevention auditor. At the same time, an instructor at "Ladies System Defense", where I teach self-defense to women with other colleagues.

We both also met through at "Ladies System Defense", where you enable women of all ages and no athletic background to defend themselves in risky situations. How did this involvement come about?

In fact, many of us were already trainers of self-defense, but for both men and women. Around 2010, we noticed that more and more women were interested in the subject. However, the offers were not always optimal, because not every woman wants to train in mixed courses, moreover the orientation of typical self-defense courses is often very martial and technical. Also the focus on the belt is rather uninteresting for many.

Therefore, we decided to create an offer, only for women, and completely independent of their physical condition, regardless of their strength. It was about getting started and repeating basic defense tips.

My theory is that around 2010 this increased demand showed up because at that time there were more attacks on people, for example, because smartphones were "at hand" everywhere, and also gold chains, torn from the neck an easy prey, very interesting because of the high price of gold. In fact, it is more difficult to rob a bank or ATM because the money is now prepared with ink, making it impossible to steal. In this respect, crime has increasingly shifted to easier targets, and if you look at the situation, women in particular have been and continue to be victims because they are often weaker. 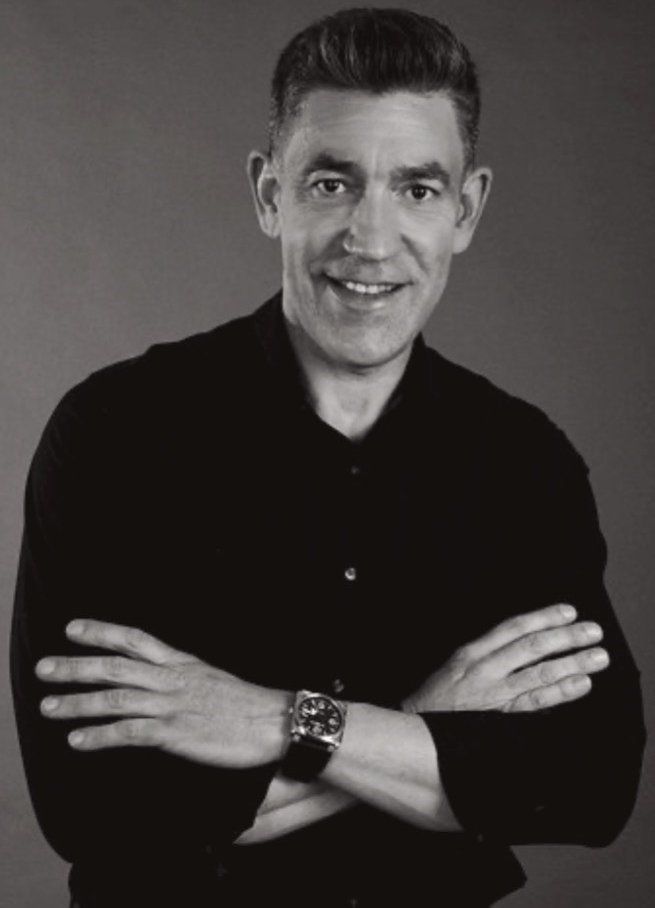 Our courses address the needs of the modern woman. We live in a violent society, and it is natural and instinctive to adapt and learn how to behave and defend ourselves. When we talk about sexual aggression, it is important to understand and analyze how the aggressors act. We try together in the courses to find a coherent response, not showing you how to defend yourself from a knife with a shoe  If someone wants your cell phone, give it to him, your life is more valuable! Many different issues are important, prevention, how to defend yourself physically and especially after that, how to proceed if you want to press charges, that you can get psychological help, how to give first aid.

That's how this idea came about. And it worked immediately, because the demand was and is high.

What is the feedback from the women? Were your courses able to help in concrete dangerous situations?

The feedback is generally very good, we also notice that in the courses and of course on the Internet and social networks.

Have you experienced critical situations yourself in everyday life?

I have experienced difficult situations, but I always try to be alert, that already comes with my job. If my intuition tells me, for example, that it smells bad, that I should better avoid this subway car and wait for another one, that I should first look around when I enter a bar ... yes, I am very alert. When I withdraw money, I put my finger on the cancel button, and watch in the glass to see if anyone is behind me. A group of people on the street in front of me, hanging around and not instilling confidence in me, I avoid them. Even in the movie theater, I immediately look where the exit is and sit down so I can see if someone is coming in with a gun.

These are natural behaviors, I don't even think about it anymore. I limit the unknown, and of course my appearance also generally puts me at less risk of being harassed. However, I do adapt and would go through life completely relaxed in a world one day populated with care bears - but that's not how it works.

As you know, I serve foreign clients who want to settle in the Paris area and want support in many ways,  such as finding an apartment. It has already happened that I have been asked by them and also by friends in Germany how I see the current threat situation in Paris. Do you think that life in Paris has become more dangerous in the last ten to twenty years?

Yes, I think insecurity is increasing, crime is also developing. It's now more complicated to rob a store, while it's much easier to kidnap a person. In addition, people are tense after the drastic lockdowns in recent months. Financial worries have increased, and the loss of freedom did its part as well. Young people are dying more often just because they give someone a glance, stabbings are on the rise - you can see all this everywhere in the news.

How do you assess the danger of new attacks?

The question to ask about the attacks, objectively, is when they will happen again, not if. Because objectively, there will be more attacks.

In contrast to 2015 - Charlie Hebdo and November 13, for example - we now see many attacks that are not as structured, with a large core of armed people, but increasingly simple knife attacks. There are many reasons for this. One is that there has been a limitation of returnees from Syria, well-trained fighters. Even though the Islamic State has suffered a major blow, terrorist cells are still capable of organizing a large-scale attack. However, the intelligence services are more attentive to returnees and local structures, so this would now be more difficult to coordinate. This is a relevant reason why we now see more "low-cost" attacks on people with knives: people are not trained, have few resources and sometimes react very impulsively.

On the other hand, there is a risk that many extremists who were once captured will soon be able to leave prison. There we are really talking about people who have experienced jihad and were trained in Syria, who are able to handle weapons and explosives! If they are released, there is a risk that we can again witness large-scale attacks, carried out by people who are more structured and capable of doing great damage, who don't just engage in knife attacks....

However, I also think that we are now much more capable in terms of intelligence and threat analysis. Law enforcement, intelligence, security forces - but well, the fight is not over.

I was sometimes asked by friends after 2015 if I wasn't afraid to live in Paris. No, I am not. I also said that in an interview after the Bataclan to a German newspaper. I really believe that I would have to be personally attacked in the Metro or experience an extreme situation to be truly afraid. I'm observant, I try to act with foresight - but I don't let fear enter into my everyday life, just like millions of other people.

Were there any incidents that we are all aware of in the media where you were on the ground?

In 2009 and 2010, I was in Afghanistan, where I was stationed for six months. In 2015, after the Charlie Hebdo attack, I was busy all night tracking down the Kouachi brothers in Villers-Cotterêts. And the next day we were in Dammartin-en-Goële.

After that, I once experienced a hurricane in the French Antilles in Saint-Martin. It was bad, we were in mortal fear and really hungry. 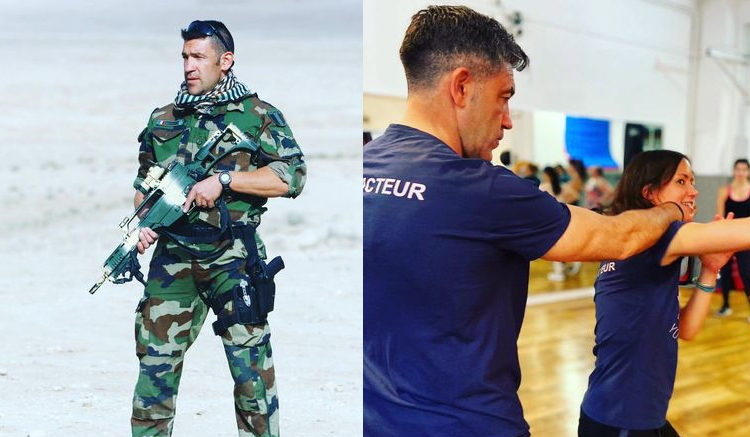 Are there any tips you can give us on how to behave in a dangerous situation?

Be alert. If someone wants to steal your smartphone and points a gun at you, you give it to them and don't argue. Know where you are, and if you are in a public place, position yourself so that you are not surprised if someone comes from the front, for example. Watch exits, know emergency exits. You should always have a way to escape.

If you experience a bank robbery, avoid looking the bank robbers in the eye - they might think "Hey, he/she could identify me!". Also avoid quick movements in general, because the attackers are under stress, hypersensitive, and if you make a sudden move, it can be the end. So reach for the wallet slowly, take it out slowly. Not with the usual brisk hand movement.

If it's a terrorist attack, you have to react quickly. It's really important to be alert to be able to escape if possible. And, of course, it's much harder to shoot at someone who's zigzagging or reducing body surface area. If you can hide, hide properly. It's not bad not to be seen - but a curtain won't protect you from gunfire. A car is better, and the engine block, unlike the doors, can stop shots from a Kalashnikov.

Unfortunately, there is no magic trick. Depending on the situation, you should be able to react. Common sense is absolutely important.

That's one thing a lot of people ask me regularly when they're looking for an apartment: they often want to know which arrondissement to recommend and which to avoid. What's your opinion?

The corner around Stalingrad is not the best, Château Rouge, also the corner around Gare du Nord is special. There are areas with drug addicts that you should avoid. I always look for a neighborhood that suits me, where people are like me. I want to feel safe for the most part.

Last question: Who can you contact if you observe something conspicuous?

The police at number 17 if you see something unusual. It is always better to call, even if a situation turns out to be harmless afterwards. You have fulfilled your duty as a citizen if you see something that does not correspond to the norm and causes discomfort, attracts attention. One discovers something, estimates this as possible danger, alarms. Whether it's a RATP agent or a police officer, go there, pass on information, and good. 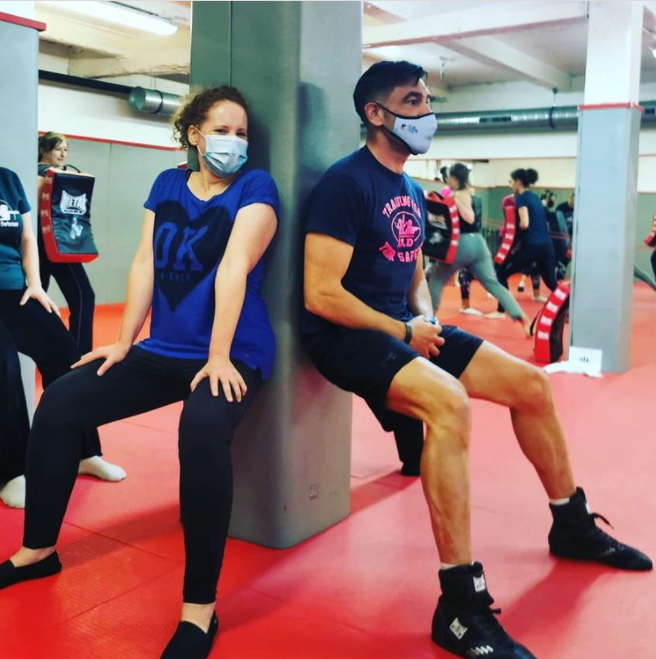 Fitness is part of self-defense!

Laurent, thank you for this interesting interview!

Would you like to know more about everyday life in Paris or "Ladies System Defense", feel free to contact me!